The flagship project we’re working on here at Seaport R&D is our 6-degrees-of-freedom robot arm. This page gives a brief overview of the goals and design. There’s also a hackaday.io project for it if you’d like to read and follow over there. 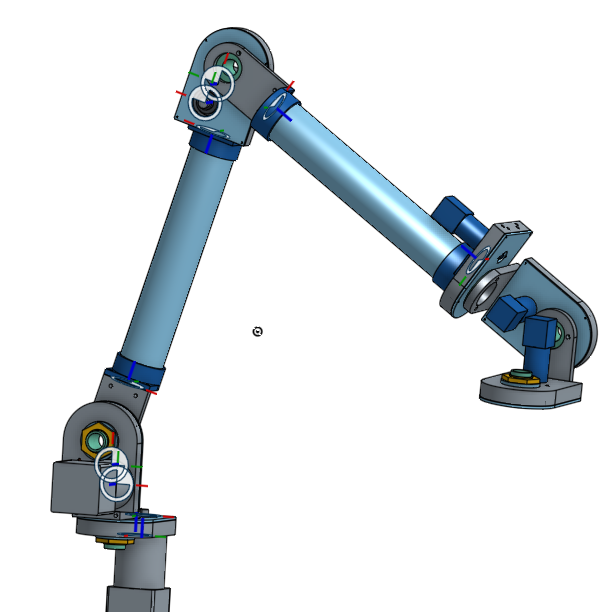 The full arm assembly in Onshape

tl;dr
An open-source, 6-degrees-of-freedom arm with at least 24″ (~600mm) reach and 1lb (~1/2kg) payload with a basic 2-jaw gripper, that can be built at minimum possible cost and design for maximum end-user hackability.

As of May 2015, the mechanical design is nearing completion and the payload-bearing capability has been validated. The electronic and software components are still being revved aggressively but are making steady progress. In short, it’s alive!

Vision and Goals
The world of the future has always been depicted as being filled with robots, and I want to make that future highly hackable.

While the use of robots in industry has grown steadily for decades, they’re still largely extremely-expensive capital investments used for automation of mass production. Outside of factories and labs, there’s the Roomba and not much else. That’s about to change.

Mechanically, robots are nothing new: the limiting factor is software. With CPU cycles continuing to get cheaper, complex tasks like high-speed computer vision are starting to become “affordable” in computing terms for consumers. While it’s fun to build software that can recognize things in the physical world, the real excitement begins when that software can interact physically with that world.

I want to build a platform that makes doing that a lot easier and more widely-accessible. The goal of this project is to make available a reference design that can be easily replicated and modified for use without the end-user needing to reinvent the whole stack from scratch.

Genesis, or, what made you do this?
This project began when I needed a robot arm for a project and didn’t want to spend $35,000 for a new arm or rely on surplus ‘bots full of extremely proprietary, expensive, and difficult-to-replace parts. Since the basic mechatronics of robots aren’t that complicated, I figured there must be some open-source designs or builds out there I could start with.

What I found was that besides the commercial options, there were a lot of toys, some of which are impressive but very limited in terms of payload and reach, and some educational robots which cost $5k+ for still-limited capabilities and came with lots of proprietary baggage. There were a few independent projects out there to build an arm like I wanted, but they weren’t designed to be replicated easily or cheaply.

Open Source
The goal for this project is to provide a living reference design that anyone can pick up, make, modify, and use without limitation. When the initial version is complete, all necessary source code, bills of material and supplier lists, and solid models or drawings will be published and made available under an appropriate open-source license.